“I sit down and I try really hard to do something I’d want to go home and watch myself. How could I know what 30 million people want? I didn’t, but I know what Steve Cannell wants. If I sat in a screening room looking at an hour of television that was really good I’d go “yes, that’s what we’re trying to do!” Stephen J Cannell, Pioneers of Television

Stephen J Cannell was the guy who brought us such TV classics as The A-Team, The Rockford Files, 21 Jump Street, Hunter, Wiseguy and The Greatest American Hero back in the 70s, 80s and 90s.

Here are a few more of his series to jog your memory:

Cannell knew he wasn’t writing Shakespeare but he also knew that popular hour-long dramas didn’t have to appeal to the lowest common denominator. He entertained the masses and is still doing so years after his biggest hits have left prime time TV schedules, these days through DVD releases, cable channel reruns and YouTube clips.

Sadly, Stephen J Cannell passed away on 30 September 2010 at the age of 69, soon after a film adaptation of The A-Team had hit cinemas and a 21 Jump Street adaptation was being mulled over in another part of Hollywood.

I’ve written on this blog before about Cannell’s influence on my life and my love of TV and film, with one of my earliest memories involving the watching of The Greatest American Hero on Australian TV in 1982, at the age of five. Those memories mainly involve Ralph (William Katt) flying into walls and hearing the incredibly catchy theme tune over and over again…

With The A-Team pulling in audiences around the globe during the mid-80s, Cannell cemented the reputation he’d built up with his earlier award-winning drama, The Rockford Files, as one of the most successful, and most prolific, creator/writer/producer/directors in the business.

He not only made deals with the networks to make his shows, he made a deal with the viewer. We gave him an hour of our time and he gave us some dramatic, funny, smart, knowing and memorable TV in return. Everyone was a winner.

OK, so what’s the point of this lengthy preamble?

Well, with Sunday marking the second anniversary of Cannell’s passing, I wanted to celebrate his life by rewatching some old episodes of his TV series, as I’ve got a fair few in the house… 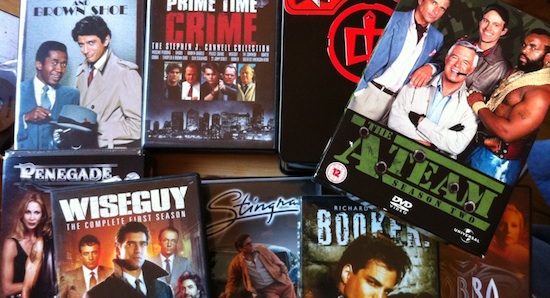 Part of my Cannell collection

But, in this age of social media (if Cannell was making The A-Team now you could probably tweet the guys for help), I realised I could spread the word a bit further than my living room, alerting a few others to the fact that Sunday is a day for sticking on an episode of a Cannell production, effectively tuning it into the Cannell Channel for 50 minutes.

As a result, I’ll be sending out a few tweets from now until Sunday using the #cannellchannel hashtag, advising that anyone with a passing interest in Stephen J Cannell take some time to remember his legacy by creating their own Cannell Channell.

Perhaps you have The A-Team on DVD (TV show or film) or fancy downloading an episode from iTunes, have Netflix in the US to watch The Rockford Files or want to sample an episode of his series via YouTube, including:

Then simply tweet your thoughts on the show using the #cannellchannel hashtag or leave a comment below, including suggestions for any other videos worth checking out. On the off chance that anyone who worked with Cannell is reading this, please feel free to leave a memory of him in the comments.

You can also find out more about Cannell over on IMDb or hear him discuss his career on the excellent Archive of American Television website.

In the event that nobody else wants to join in on Sunday I’ll watch a few episodes of Cannell series I haven’t got around to yet, mainly from the Prime Time Crime Collection.

Of course I do hope a few others can find the time to remember Cannell, after all I love it when a plan comes together…

Well done to the team at Stephen J Cannell Productions for keeping the legacy of one of television’s greatest assets alive after his death: they’ve just launched a new website which remembers him and celebrates his career.

Regular readers will know that my love of Cannell’s output, whether that’s The Greatest American Hero, The Rockford Files or The Rousters, knows no limits – those are a few of my Cannell DVDs above.

A look around the new website reveals that they’ve ported a lot of content from the previous version but also added some new items. As well as information on the majority of his shows you can download Cannell’s scripts from each of them for free. Combine those with the online writing tutorials, both written and in video, and there’s a writing course just waiting to be taken.

I’m hoping that they keep adding new information from the Cannell vaults over the coming year, certainly some clips from the rarer shows that didn’t quite make it as big as The A-Team. Interviews with Cannell production staff would also be good to see.

For my own part in publishing more Cannell content, I managed to interview long-term Cannell friend and collaborator, Mr Jo Swerling, Jr, while on a recent trip to Hollywood. Jo produced many of Cannell’s series and had a lot to say about TV production in the 1980s. I want to get it online in the next month or so, but as our discussion lasted for almost two hours, it might take a while to write up.

In the meantime, head over to www.cannell.com and enjoy yourself. You can also join the Stephen J Cannell Facebook page for more updates

“So that’s it. Cue the end music. Roll the production logos. Bring up the final end card and we’re at: The End.” The final words in Stephen J Cannell’s last novel, The Prostitutes’ Ball

There’s been something missing on this blog for a while now, something I’ve been acutely aware of but which, thanks to time pressures, I knew I wouldn’t be able to do justice to: a tribute to TV producer Stephen J Cannell.

It was last September that the man who created/co-created/produced/wrote/directed series such as The A-Team, The Rockford Files, Hunter, The Greatest American Hero, Stingray, Wiseguy, The Commish and many, many more died at the age of 69.

I’ve noted before that one of my earliest TV memories is watching The Greatest American Hero at the age of five while in Brisbane, Australia. My family had emigrated there in 1982 for what would turn out to be a very short time (we didn’t see the year out Down Under), but certain things linger in the mind. Barbeques. School assemblies. Ralph Hinkley in the red jammies.

A combination of Joey Scarbury’s annoyingly brilliant music and some fast-paced action with a healthy dose of humour meant that to my mind it was televisual manna from heaven, far better than most of the cartoons being thrown my way. At least, I assume that was the thought process. After thirty years things get a little hazy.

A few years later, now back in Scotland, we had a weekly adventure for The A-Team on ITV to look forward too. These days I’m a big Doctor Who fan and I now realise that I was missing the good Doctor each Saturday on BBC1 as I waded through the adverts on The Other Side to see what Hannibal, Faceman, BA and Murdock were getting up to. But The A-Team was shiny and fresh and you could play with the toys in the garden or at being the characters at school. Nobody spoke about Doctor Who back then.

Since then I’ve stumbled across various US series that grabbed my attention and stuck in the mind, usually thanks to their wit and action scenes. Episodes of Hunter and Renegade, mostly only half-watched, screened late night while at school. James Garner in the Rockford Files on weekday afternoons while at university. Repeats of Riptide at 3am on weekends on Channel 5, again while at uni.

What I didn’t realise for a long time was that all of these programmes had something in common, namely Stephen J Cannell. Born in Los Angeles in 1941, Cannell may have had severe dyslexia but he graduated from the University of Oregon in 1964 with a degree in journalism.

It was in 1968 that Cannell sold his first TV script to Universal for the Robert Wagner series, To Catch a Thief. After a few years as a jobbing scriptwriter, Cannell rose through the ranks of TV to end up one of the most powerful men in Hollywood, running his own independent studio and bringing numerous hit series to our screens.

I spent some of Christmas 2010 watching the Archive of American Television’s excellent interview with Cannell, which takes around three hours to get through but which offers a fascinating look into the mind of the man and his dedication to the writing process.

I could go on for multiple blog posts about the skill behind Cannell’s work and the way he makes it all look so simple. He admitted that much of his action/adventure output was targeted at the average Joe who gets home after a hard days work and who wants to be entertained by his TV set. Cannell was happy with being part of mainstream and so were his viewers.

Interestingly, while my love of Cannell shows hasn’t wavered over the years, my own interest in the mainstream has. It’s dangerous to generalise about TV in 2011, but I’ll have a go anyway. While the odd piece of scripted television still comes along that has the power to entertain, excite, scare, chill or in some other way engage the audience, much of it is simplified to the point of being offensive.

A Cannell show may have been dumb fun, but it was never dumbed down. Cannell was happy to keep things looking simple on the surface, but there was usually something more going on beneath. Just watch one of his Rockford’s, where a plot may begin like a standard private eye show before spiralling off into something much odder and always unique.