Arriving DVD almost two years after series one appeared, Super Gran: The Complete Series Two, mirrors the programme’s original transmission: it was in January 1985 that Forrest Wilson’s eponymous heroine made it to ITV screens courtesy of Tyne Tees, but it wasn’t until March 1987 that she returned.

A quick scan of IMDb reveals some upheaval behind the scenes, with the change of three young leads, a new producer in Graham Williams and a new composer in the shape of Dudley Simpson. 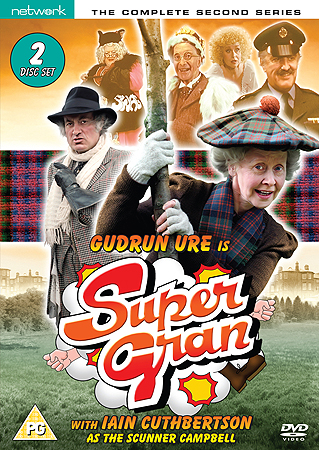 At first glance nothing much has changed, with Gudrun Ure back as super granny Smith and Iain Cuthbertson stealing every scene as Roderick “Scunner” Campbell, a baddie so useless that he spends most of his time plotting naff money-making schemes rather than carrying them out.

Filmed on location in Tyneside in clearly freezing weather, with a smattering of thick Geordie accents in amongst the Scottish brogues of the leads, there does seem to have been a decision to add more comic book elements to proceedings, various animated inserts making an appearance.

Ahead of series two making it to screens, Supergran-starved fans were treated to a 1986 Christmas special, a 50-minute romp set during the festive period in which the town of Chisleton becomes the backdrop for a Battle of the Circus’s, a chance for the locals to show off their skills as Scottish circus entrepreneur, Mac McLock (Rikki Fulton), arrives in competition.

An excuse to put Supergran through her paces on the trapeze, the episode has little to distinguish it from the rest of the run, bar the opportunity to see Fulton and Cuthbertson reunited on-screen eight years after the glorious Charles Endell, Esquire.

For the full 1987 series we’re back to special guest appearances – Barbara Windsor, Leslie Phillips, Bernard Cribbins and Ken Campbell just some of those heading to windy Newcastle for a few days filming – and plots which don’t stand up to much scrutiny.

Whether they’re setting out on the annual Chisleton treasure hunt, becoming snooker playing celebrities or trying to get the Scunner back onto the list of top criminals, it’s the bad guys that provide most of the best moments here, Iain Cuthbertson appearing to relish the chance to wring out every available joke from the script.

Indeed, Ure may be the supposed star of the series, but Cuthbertson gets more screen time, even allowed a few flashbacks and dream sequences here and there. The final episode, in which the Scunner must try to prove that he’s the long-lost son of Patrick Troughton’s Roderick of Roderick, Great Sporran of the Isles, is one of the most memorable of the lot for the Scunner, and makes one wonder if a spin-off wasn’t deserved for the tartan terror.

The scripts from one-time comics writer, Jenny McDade, have enough incident to keep the kids entertained for 25 minutes, the meagre budget just about stretching to meet her demands.

Also included on this two disc set is a documentary made during the first series in which the cast and crew appear a happy, if cold, family. It’s also nice to hear Cuthbertson speaking without gruff affectation for once.

Quite why Super Gran didn’t make it to a third series is a mystery, but in just 27 episodes it managed to leave an indelible mark on popular British culture and give us a theme tune that remains a bit of a classic:

Super Gran: The Complete Series Two is out on Monday 16 May from Network DVD.