Picking up a few months after the end of Strangers, in which Chief Inspector George Bulman walked away from the job and left a nation in mourning, Bulman sees our hero turn private eye and opening up a London clock hospital.

The trappings of the job may be gone, but thankfully the gloves and love of poetry are still present and correct.

Joined by Lucy McGinty (Siobhan Redmond) and occasionally aided by ex-colleagues Jack Lambie (Mark McManus) and Derek Willis (Dennis Blanch), Bulman’s desire for a quiet life never quite materialises as the underworld and the British Secret Service, the latter in the shape of Dugdale (Thorley Walters), infringe upon his solitude. 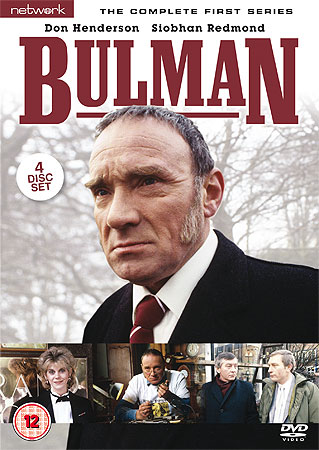 Fans will recognise find healthy traces of Strangers in Bulman, particularly the blend of humour and drama which, in lesser hands, could derail an episode.

Murray Smith’s One of Our Pigeons is Missing, in which a tramp is found dead and Bulman must go undercover as a down and out, is a typical example, the bizarre idea that the Anglo-Soviet conflict hinges on a small area of London’s Docklands given a touch of pathos by Murray Melvin and Maggie Jones.

Throughout these 13 episodes we’re given a new spin on various well-worn police procedural themes, Bulman’s move away from the constraints of the law allowing for a new lease of life for the character. The series has a breezy air about it, helped no end by Henderson’s skill at knowing how read a line and Smith’s perfectly pitched scripts.

Redmond is undoubtedly the other star of the piece, even if McGinty’s credentials are never fully explored. Though one misstep of an episode seems to bin most of what we know of McGinty as she goes undercover for British Intelligence without question, the rest of the series offers up scripts which should be required reading for screenwriters today.

By not shoehorning too much of Strangers into the programme – the odd appearance of Willis and Lambie is always a treat – and letting George K Bulman have the lion’s share of screen time, the series isn’t merely an opportunistic spin-off, but a fully fledged programme in its own right which should appeal to those unfamiliar with its predecessor.

British television in the 1970s was something of a haven for cop shows, a place where men were men, slags were slags and Guv was seemingly the preferred title for any officer above the level of Constable.

Viewers more used to the gentle methods of PC George Dixon would soon be choking on their TV dinners as a decade of The Sweeney, The Professionals and a whole new lexicon comprised of shooters, blags and shouts was introduced to the national conscience, not to mention a host of imitators and rivals to Regan and co.

It was in 1976 that ITV brought author Kenneth Royce’s novel XYY Man to the small screen, the story of cat burglar William ‘Spider’ Scott (Stephen Yardley), his extra Y chromosome and the resultant criminal tendencies.

Co-starring in XYY was gruff actor Don Henderson, a man with a face for playing villains, who went against type to portray DS George Bulman, a no-nonsense copper with a violent edge.

XYY would only last 13 episodes, after which Bulman should have been relegated to TV history along with colleague DC Derek Willis (Dennis Blanch) – that is until Granada TV decided they wanted their own version of The Sweeney and lured Bulman away from the safety of the Met to the frozen North West of England circa 1978.

Thanks to Bulman and Willis’ anonymity in the north (they are the Strangers of the title), and after being joined by WDC Linda Doran (Frances Tomelty) and DI David Singer (John Ronane), the pair could go undercover in various operations which would have proved impossible for the local police.

Series One was clearly a something of a baptism of fire for all involved, the desire to create a fast-paced crime show somewhat neutered by the decision to shoot the series on video and give it a Light Entertainment-style theme tune which wouldn’t have seemed out-of-place on a Bruce Forsyth game show of the era.