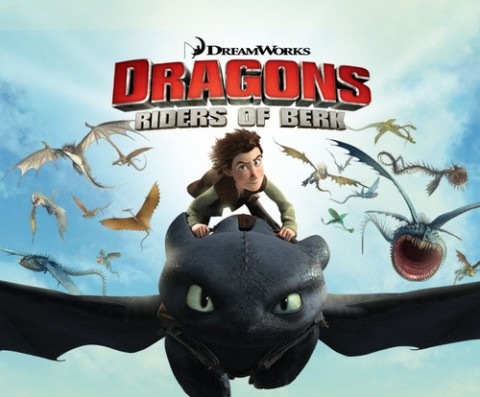 There was some good news at the weekend for British fans of 2010’s animated film, How to Train Your Dragon, as the TV spin-off arrived on the Cartoon Network.

Dragons: Riders of Berk picks up a short time after the events of the Dreamworks film, when (and this is a spoiler if you haven’t seen How to Train Your Dragon) the Vikings of Berk and their dragon neighbours are living in harmony.

Well, as harmoniously as can be expected when you’re talking about flying beasties that breathe fire.

Now it’s up to the humans to stop killing the dragons and train them to help them in their daily chores, with the first double bill of episodes neatly reminding fans what had gone before while informing newbies what they’ve missed.

The young voice cast from the film has been retained for the TV series, including Jay Baruchel as lead Hiccup, while the adult actors are now Americans pretending to be Scottish as Gerard Butler and Craig Ferguson are off doing bigger things.

Thomas Wilson (Biff from the Back to the Future series) is Bucket while ex-Doctor Who David Tennant is also due to pop-up in a future episode as Spitelout Jorgenson, recreating his role from the movie.

The series retains the computer generated look of the feature film and much of John Powell’s terrific score, a soundtrack I’ve been listening to regularly for a few years now. Composer John Paesano joins the series for weekly scoring duties.

Two seasons have been commissioned and 40 episodes are in the works, with season two to be called Defenders of Berk. Season one began in the US in August 2012 so we’re a bit behind, but judging by these first episodes it’s a programme worth sticking with and I can’t wait to follow the adventures of Hiccup, Toothless and co.

We’re also promised two new feature films in 2014 and 2016, meaning the How to Train Your Dragon franchise should be a long and fruitful one, something worth celebrating in this world of soulless sequels.

Dragons: Riders of Berk airs on the Cartoon Network on Saturdays at 10.30am and 6.30pm.