Returning to a time when ITV invested in one-off TV films rather than padded out, multi-episode series or reality programmes, 1976’s Machinegunner is an oddity which it’s hard to believe will have a huge fan base but which should be welcomed.

The always-watchable Leonard Rossiter is Bristol-based Cyril Dugdale, a debt collector (or machinegunner in West Country parlance) and part-time detective who becomes embroiled in goings-on which, on the surface, appear to entirely unrelated. 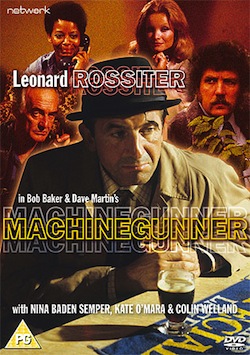 When he’s not trying to move residents from one part of the city to another, their dwellings required to ensure new properties can be built and the city regenerated, Dugdale is being employed by Felicity (Nina Baden Semper) to prove that a certain well-known individual is involved in sexual shenanigans of the extra-marital kind.

Being short of money and even shorter on opportunity, Dugdale accepts the job, just before he discovers that all is not what it seems. Colin Welland and Kate O’Mara also make appearances, the former adding some genuine menace to proceedings.

Scripted by veteran writers Bob Baker and Dave Martin, Machinegunner is suitably grotty around the edges, future Robin of Sherwood director Patrick Dromgoole giving us a Bristol which looks as brown and depressing as Birmingham did in 1975’s Gangsters. Fans of the latter will feel right at home here.

Rossiter’s portrayal of Dugdale isn’t too far removed from his career-defining turn as Rigsby in Rising Damp, the hands-on-hips pose of the latter employed at least once. He’s also magnetic as our “hero”, a cowardly, down-at-heel and perpetually bemused man whose life is unlikely to ever rise above average.

Baden Semper’s role is a substantial one, a strong black woman in a white man’s world, and it’s always fun to watch Dugdale’s fruitless attempts at seduction.

The conspiracy which lies at the heart film is played out at a relatively leisurely pace, Rossiter’s slowly dawning realisation of what’s happening around him a joy to watch. The balance between humour and drama may feel slightly uneven at times, with violent acts pitched into scenes seemingly being played for laughs, but that also helps to misdirect the audience.

On a side note, it’s interesting to watch yet another programme which queries the relentless pace of urban regeneration in Britain’s cities: it was only last year that 1982’s Muck and Brass arrived from Network DVD, which covered some of the same ground.

Low-key, pessimistic and darkly comedic, Machinegunner is recommended to anyone who wants to watch Leonard Rossiter on top form as a new Britain slowly evolves around him.