Spruced up with improved picture quality and beefed up with enough extras to fill the Pandorica a few times over, three classic Doctor Who stories are now back to entertain fans all over again.

The Talons of Weng Chiang sees Tom Baker’s Sherlock Holmes-inspired Fourth Doctor roaming the foggy streets of Victorian London with his very on Eliza Doolittle in the shape of Leela (Louise Jameson) while aliens and rogues get in his way.

Peter Davison’s swansong, The Caves of Androzani, is the type of multi-layered, fast moving and near perfect romp that we remember all of his stories to be (at least until we see Time Flight again), a doom-laden epic which pits the Doctor and Peri (Nicola Bryant) against Sharaz Jek (Christopher Gable) and a gaggle of mercenaries. 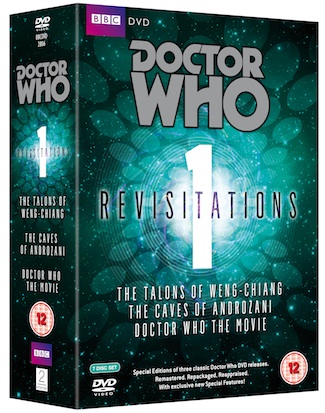 Finally, the 1996 TV Movie stars Paul McGann as the Eighth Doctor, destined to enjoy just one night only on our TV screens before vanishing off onto audio adventures for an eternity. The San Francisco of 1999 was the backdrop for his battle against Eric Roberts’ Master, an intermittently threatening presence with a great line in evening wear.

The downer for long-term fans with this set is the fact that they’ve all been released before, though that was near the start of the range, the technology and ambition available to the Restoration Team who put the DVDs together clearly improving over the years.

Now, in addition to all the previous extras, we get a bundle more, a substantial haul which it’s hard to fault. Talons is awarded three discs this time around, with a typically bonkers Tom Baker meeting ex-producer Philip Hinchcliffe in his kitchen to discuss their time on the story and a number of mini-documentaries examining every aspect of this much-loved tale.

Caves gets an informative new documentary from TV and film historian, and über-fan, Matthew Sweet plus an odd appearance on Russell Harty from Davison and the incoming Colin Baker, while the picture quality on the story itself is impressively clear.

The TV Movie does the best out of the bunch, with three in-depth documentaries: the first looks at the so-called Wilderness Years that lasted between the end of the series proper in 1989 and it’s rebirth in 2005; the second goes behind-the-scenes of the TV Movie’s pre-production; and the third is the second part of a series which shows how Who was depicted on kids’ magazine show, Blue Peter.

Then there’s the brand new commentary with Sylvester McCoy and Paul McGann, the latter quite restrained, but as it’s the first time he’s seen the story since the 1990s that’s almost forgiveable.

Overall this new release may hurt the pocket of those who have already invested in the original discs, but be assured you are getting a large amount of new content for your cash. For newbies, this is a no-brainer, a set which will enrich your love and appreciation of each story no end.

Sadly, none of it will adequately explain why Davison was wearing that tux on Russell Harty.