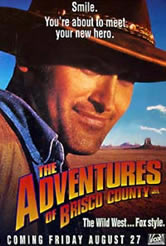 If you’re looking for a Western/sci-fi/comedy/action cult TV series, you could do a lot worse than The Adventures of Brisco County, Jr.

Set in the Wild West of the 1890s, Bruce Campbell stars as the titular Brisco, a Harvard educated lawyer turned bounty hunter following the murder of his father by the John Bly gang.

Running for only one season in 1993, Brisco merged elements of Indiana Jones (the series was co-created by Indiana Jones and the Last Crusade screenwriter Jeffrey Boam), 1930s Saturday Matinee serials, the 1960s TV series The Wild Wild West and The X Files, to create a bizarre world of its own.

Most of the 27 episodes follow Brisco, his “partner” Lord Bowler (Julius Clary) and sidekick Socrates Poole (Christian Clemenson) as they try to round up the Bly gang. They occasionally sidestep this hunt to take on other adventures, giving a nice bit of variety as the series goes on.

Watching so many episodes in a row on DVD makes you appreciate how much effort went into making the show – it’s packed full of stunts, jokes and one-liners that keep the stories ploughing ahead full steam (or rocket if Professor Wickwire (John Astin) is involved) while the sc-fi elements are never too OTT to divert from the Western themes.

Bruce Campbell is a fantastic lead and it’s a real shame it was never commissioned for a second series. So get on the trail for a copy of this set, get those six-shooters ready and saddle up…or at least stick it in the DVD player and enjoy a few hours of great telly.